DraftKings is a fun, exciting, and totally legal way to make money wagering on UFC online. For traditional gamblers, though, the “Fantasy Betting” format might be a little tricky at first. To help you start making money at DraftKings as quickly as possible, we put together this step-by-step guide to navigate you through entering a contest, drafting your team, and winning big!

This step is fairly self-explanatory. You’ll see a list of available games, like the one below. Decide which game type you want to try, figure out how much you want to risk, and select a lobby. For more information about the game types you can try, be sure to check out our game type guide. 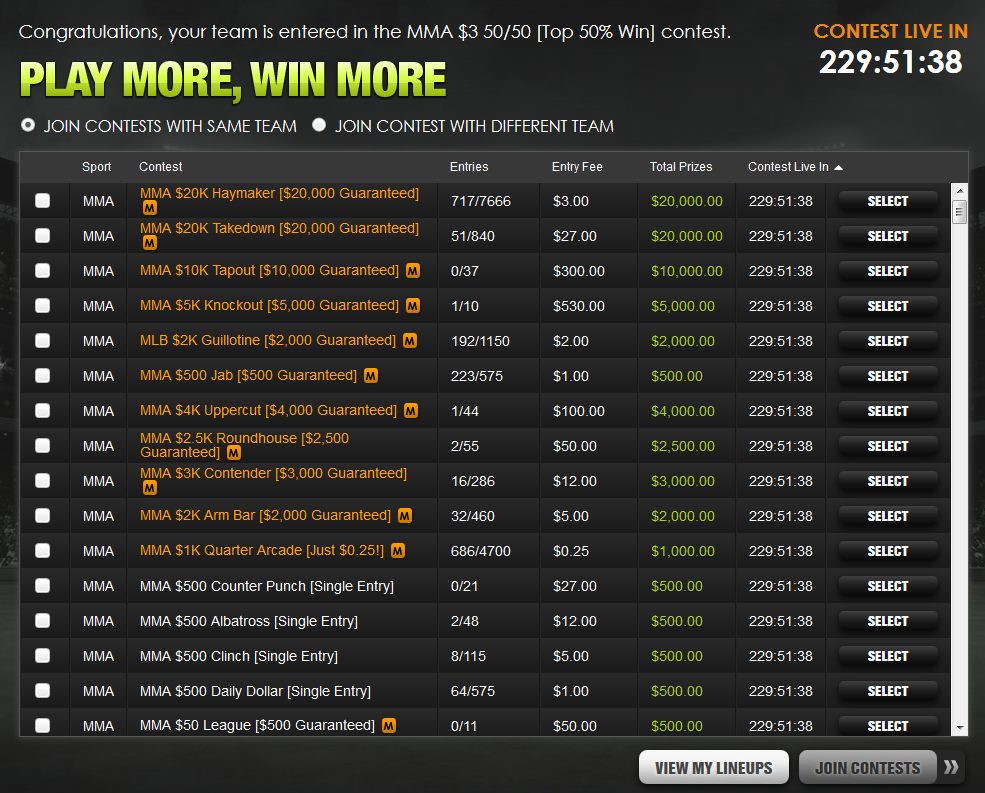 Once you have confirmed your entry into a game, you will be taken to the game lobby, seen below. Here, you can see the complete salary information for every fighter, each individual matchup, and any selections you make. This is your control center for this game. You can see in the screenshot that the lobby displays payouts, the time until the contest actually begins, how many entrants your game has, and other pertinent information. 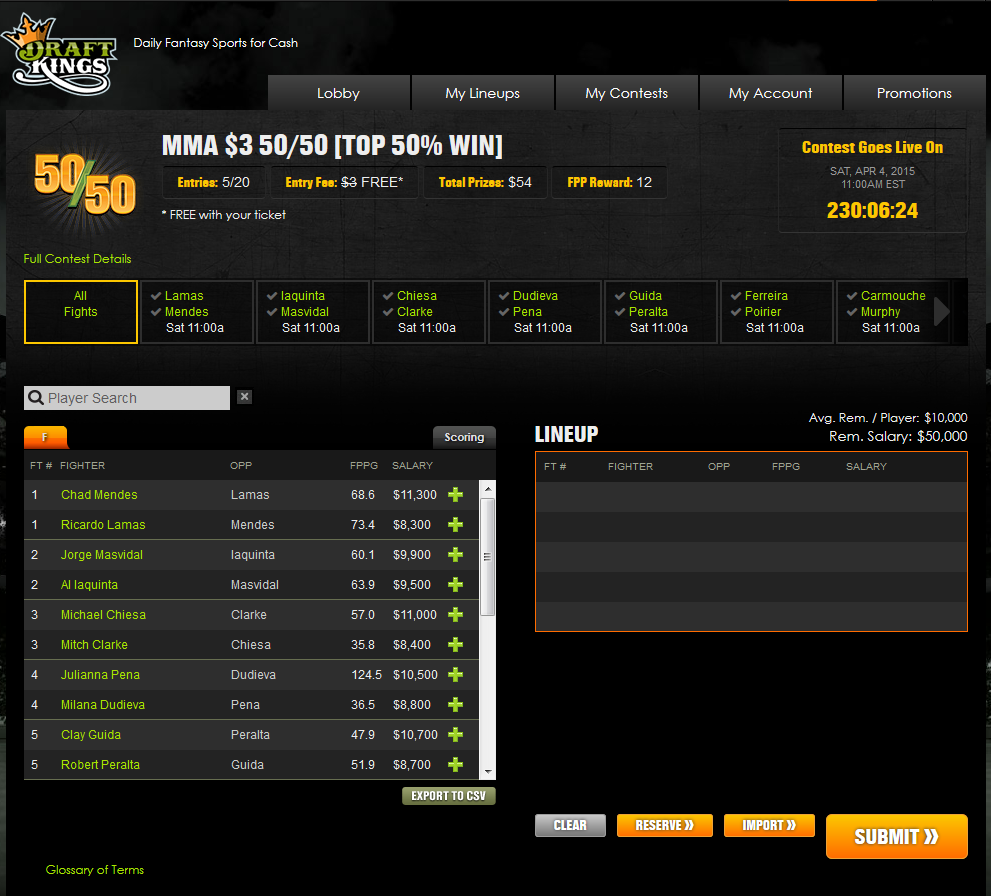 On the left side of the screen, you will see the complete list of fighters available to draft in your game. In addition, you will see each fighter’s opponent, their salary value, and their previous FPPG, or “fantasy points per game“. While FPPG shows past performance, it is not necessarily a good indicator of which fighter to pick. For instance, a debuting fighter in UFC might knock out his equally unknown opponent in the first round, generating a large number of fantasy points. That large number, though, does not make him a good pick if his next fight is a big step up in competition or a worse stylistic matchup. The thing to remember when considering who to draft is that styles make fight. 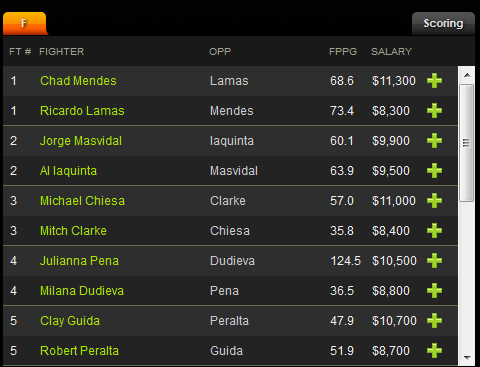 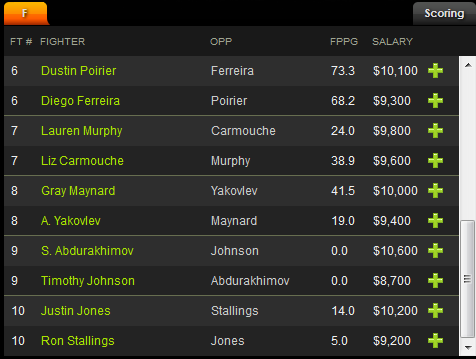 As you can see from the screenshots above, fighter salaries can range anywhere from just over $8000 to more than $11,000. The goal is to pick five fighters without going over the $50,000 mark, and that is where the strategy comes in. As you can see, heavy favorites are correspondingly more expensive. The two most prohibitive favorites on the show, in terms of traditional odds, are Michael Chiesa and Chad Mendes. These are the two safest picks, but that safety comes at a cost. By spending extra money to pick heavy favorites,  you have to compensate elsewhere by picking bigger underdogs. 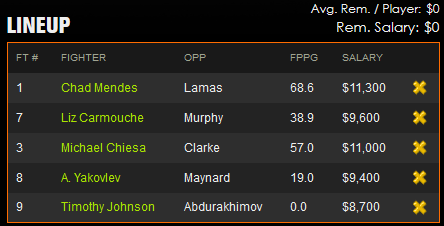 In this lineup, we took both Mendes and Chiesa. Because we picked two such expensive fighters, we were forced to find savings elsewhere. Consequently, we picked an extreme underdog in the form of Timothy Johnson, another underdog in Yakovlev, and then rounded out our team with Liz Carmouche, whose fight against Lauren Murphy is basically a push. Keep in mind that, because of the competitive nature of MMA and the DraftKings salary cap structure, you are not always going to pick five winners. A lineup like this, with heavy favorites and a few underdogs, at least gives you a couple of highly-likely wins while depending on a few longshots to either win or put up high-point performances.

If you don’t want to hang so much of your success on heavy underdogs, you could go with a lineup more like this: 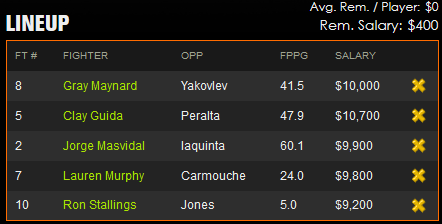 In this case, we avoided both Chiesa and Mendes, whose high costs forced us to pick those heavy underdogs. Instead, we took Guida, Maynard, Masvidal, and Lauren Murphy, all of whom are narrow favorites facing highly competitive opponents. Here, Ron Stallings is our only substantial underdog pick, but the four favorites we chose are not nearly as likely to win as Chiesa and Mendes are. This is, in some ways, a higher-risk, higher-reward option. Even though you are technically picking more “favorites”, not all betting favorites are created equal, and none of the four fighters we chose has a mismatch as noticeable as Chiesa and Mendes do.

Now that you’ve devised a strategy, all that’s left is to make your picks. To add a fighter to your lineup, simply mouse over the fighter you want to choose from the box on the left and click the green plus sign. Once you have all five fighters added to your roster, you’re good to go.

You’ve examined your options, devised a strategy, and set your picks. You’re ready to go! At the bottom right of your screen, you’ll see a big orange “SUBMIT” button. Click it! 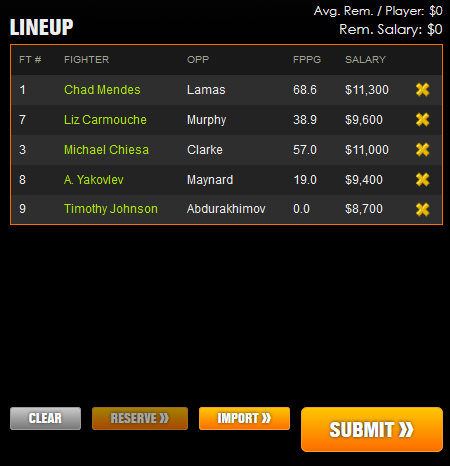 This is it, the final step! You’ve submitted your picks, now it’s time to make it official! This is the point at which you will actually be charged your entry fee. You did your due diligence and you’ve got a winning team, so click that orange “ENTER NOW” button, and you’re ready to turn a profit! 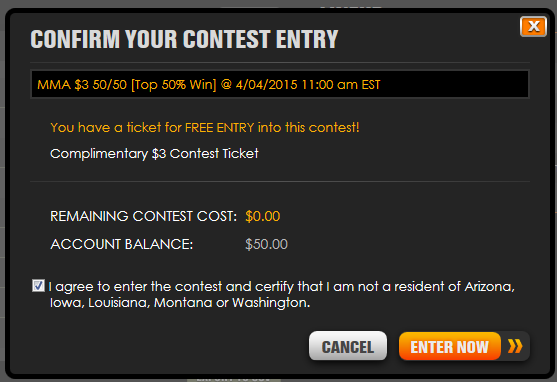 THIS IS IMPORTANT. Even though you’ve officially entered, none of your picks are final until the contest actually begins. MMA is an unpredictable sport, and sometimes cards change, fighters get injured, or matchups are switched around. On the DraftKings homepage, you will see a link on the menu labeled “MY GAMES”. At any time, you can click this link to monitor all of your active entries. Just like in traditional fantasy sports, “set it and forget it” is a recipe for disaster. Check back every day up until the event to make sure your lineups are still valid and that nothing big has changed.

You did your research, optimized your team, submitted your entries, and made sure everything stayed up to date. All that’s left now is to win games and make money! Head over to DraftKings now, you’re ready to make the big bucks!