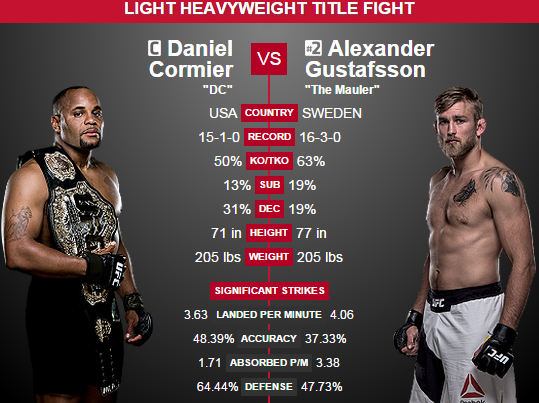 Coming to us LIVE from the Lone Star state of Texas is a Light-Heavyweight bout you do not want to miss! Champion Daniel Cormier places his title on the line against one of the toughest men that has every graced the UFC octagon, Alexander Gustafsson. After all of the recent struggles with Jon Jones, we all knew this fight was inevitable. Notwithstanding the murmurs about Jones not being able to compete making this match nearly moot, this are two of the best fighter the UFC has to offer. Each come into the octagon with their own fighting style which gives this match the X-factor. Coming off the the tile victory over Johnson, Cormier comes into this fight with some serious confidence. Gustafson on the other hand knows he is the closest person to defeating Jon Jones and taking that title away from him. Both these guy have what it takes to be champion, and this is how I think it’ll play out…

Whatever word the fighting world has come up that is the opposite of a glass-jaw, we should also place a picture of Gustafsson next to it. This guy stood in the octagon with Jon Jones for five-rounds and took it on the chin the entire round. He can basically do anything you need him to do. He’s a lean, and long striker with the ability to submit his opponents if needed. Gustafsson is going to want to stay on his fight and engage in a striking war with Cormier because thats the way he can win. My advice is just that. Stay on your feet and you win this fight. Cormier can strike but not with Gustafsson. Work on that take down defense, and move around and make Cormier chase you, then strike.

Cormier is the Champion, I don’t care what anyone says about Jon Jones. Cormier has followed the rules and paid his dues to be called a champion of the UFC. This is going to be one of the toughest fights of his life though. I stated earlier that Cormier doesn’t want to get into a brawl-like match but that need to be with an asterisk. If Cormier can get Gustafson to the mat, he needs to just pound away, thats how he is going to win. He knows he can stand or match up with lean strikers, and thats a epitome of what he is going to have. He needs top come in with a plan of how to get Gustafsson to the ground. I don’t see just taking shots at the legs working as well as it would against a less formidable opponent. Cormier needs to grapple, slam this guy to the ground, and finish him off as fast as possible.