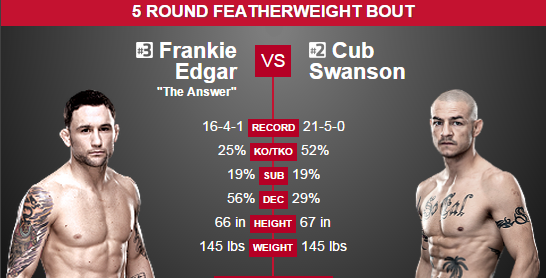 Coming to us LIVE from the great state of Texas, UFC Fight Night bring us Frankie Edgar vs. Cub Swanson. Two of the most prolific MMA fighters in the world will try and prove they’re the one that deserves a shot at the Featherweight Title.  Lets analyze these fighters and pick a winner…

When you’re trying to analyze a fighter such as Frankie Edgar, deciding where to start is the most difficult part. Edgar can move, jab, counter, grapple, and shoot with the best in the world. With such a plethora of strengths, it makes you wonder where his faults lie. Watching Frankie Edgar live and on the big screen numerous time, I believe his overall strength makes him vulnerable while in certain positions. If Cub Swanson is able get Frankie Edgar near the cage or is skilled enough to be on bottom and use strength to switch positions, that’s where you’ll see this fight turn. Edgar wants to move, throw jabs, and shoot for points whenever he possibly can. One aspect of Edgar that isn’t spoken about often is his ability to frustrate the other opponent. Typically when we speak defense, we’re talking about to ability to defend against the takedown. In our case, we’re talking about what happens after the take down. As a former Colligate Wrestler Edgar has been taught how to escape from nearly everything. Go back and watch some prime Frankie Edgar fights and watch his ability to get back on his feet quickly after being on back. Edgar needs to pick his spots carefully. Cub could possibly be one of the most dangerous fighters in the Featherweight right now, and one slip could cost him his career. Edgar is going to want to stay on his feet and shoot when he sees that opening and lock in a submission as fast as he can.

What many don’t realize is that it’s not what you know about Cub Swanson that makes him difficult, it’s what you don’t know. Frankie  is going to have a serious challenge in deciding exactly how to train for a fighter as unorthodox as Cub Swanson. Cub switches from orthodox to southpaw whenever he needs to and has combinations of kicks and flying punches you really cant train yourself to defend. What I believe scares fighters the most about Cub Swanson, is that every fight he improves.  Here’s my advice for Cub… Keep Edgar off-balance while on your feet. Keep switching stances and moving while throwing those tight jabs that have always been so effective. Be aware of the counter-attack and capitalize on Edgars’ first mistake.

How Fox Sports 1 was able to get a fight like this one on prime time television is a treat for all MMA fans. In my honest opinion, this might be one of the best fights of the year. I just cant see Frankie Edgar stopping the train that is Cub Swanson. Cub Swanson will just be too much for Edgar to handle. I’m not implying domination on the part of Cub Swanson, I’m simply saying if this fight goes the entire length, I see Cub taking the decision home.