On Saturday, December 8, 2012, one of the most highly-anticipated fights of the year will take place as pound-for-pound king Manny Pacquiao squares off against Juan Manuel Marquez live from the MGM Grand Garden Arena in Las Vegas, Nevada. This marks the fourth time these two men have fought, with Pacquiao taking narrow decisions in two of their previous three and the other ending in a draw. Although Pacquaio has won two out of three, many pundits agree that Marquez could, or should, have won all three of the fights. Somehow, Pacquiao always scrapes out a decision win, even when the majority of people seem to think Marquez looked like the better man. No matter what happens on the scorecards, every time these two clash it makes for an entertaining and exciting fight, so this has all the makings of a great attraction and perhaps even a late Fight of the Year candidate. 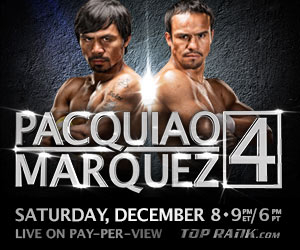