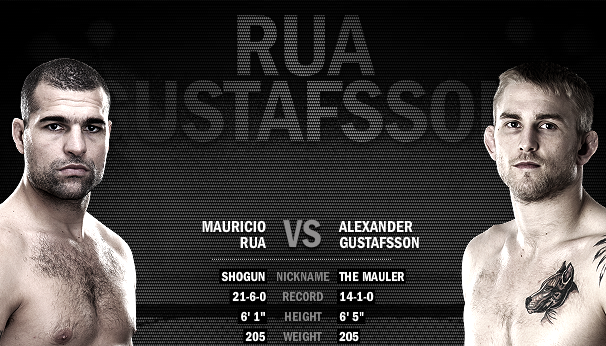 In the semi-main event of UFC on FOX 5, former UFC Light Heavyweight champion Mauricio “Shogun” Rua will face a stern challenge in the form of up-and-coming Swedish prospect Alexander “The Mauler” Gustafsson. While Shogun has slipped a bit from the form that made him the most feared Light Heavyweight in the world in his PRIDE heyday, he is still a formidable striker with an underrated ground game. Gustafsson, though, could present some serious problems for Shogun in that he is also a skilled striker with a solid ground game who is younger, fresher, more physical, and probably in better condition. If Shogun wants to avoid a loss here he is going to need to fight smart and not gas out early and allow Gustafsson to overwhelm him.

Mauricio “Shogun” Rua was, at one point, the scariest Light Heavyweight on the planet. He destroys his opponents with accurate and powerful punching, devastating knees from the clinch, and an aggressive fight style that kept opponents running scared. Since making his UFC debut, he has suffered a series of knee injuries which have impacted his fitness fairly seriously. He still has the technique and power that made him such a terror in his PRIDE days, but his ability to push the pace for the entirety of a fight has degraded significantly. Still, anyone who is willing to stand in front of him is putting themselves in danger, because he has lost none of his ability to finish fights with strikes.

Alexander “The Mauler” Gustafsson is one of the UFC’s most exciting and up and coming Light Heavyweights. A heavy-handed striker with solid wrestling and submissions, Gustfafsson’s versatility and athleticism make him a dangerous opponent for anyone in the division. His only loss came at the hands of Phil Davis, when he was outmuscled and caught in an anaconda choke on the mat. Against Shogun he probably doesn’t have to worry about getting taken down and submitted, since he is probably the superior of the two in terms of grappling. If he can avoid getting caught on the feet, chances are he can land some good shots of his own and probably score some points with takedowns.

While Shogun is certainly the more established of the two, I think this fight favors Gustafsson. Both guys are capable of ending fights with strikes, but I think Gustafsson has the better gas tank and should be able to take Shogun off his game with superior grappling. This will be a close fight, but I think Gustafsson should be able to land enough punches and score with takedowns to earn a unanimous decision victory.