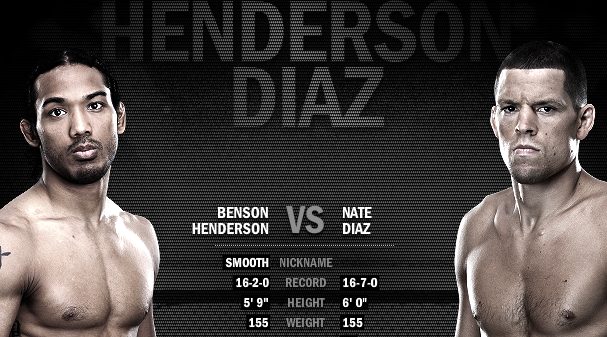 In the main event of UFC on FOX 5, UFC Lightweight champion Benson “Smooth” Henderson will defend his title against top contender Nate Diaz. Henderson is coming off back-to-back wins agaisnt former champion Frankie Edgar and has been on a tear since coming to UFC from WEC, but Diaz represents an entirely new sort of challenge. Henderson is one of the most versatile and athletic fighters in the UFC Lightweight division, but Diaz’s high-volume and unorthodox striking is tough for opponents to figure out and he is one of the most prolific submission grapplers in the division. If Henderson wants to keep his title he is going to have to find a way to deal with Diaz’s striking and figure out how to control him on the ground without getting submitted, which is a tall order.

Nate Diaz is one of the Lightweight division’s toughest fighters to figure out. Like his brother Nick, he has very unorthodox striking that comes at opponents from odd angles and punishes them more with volume than with the power on any individual punch. His ground game is spectacular, and he has submissions from every position. One of Diaz’s best attributes is his ability to get in his opponents heads and throw them off their game with trash talk and mind games. If there is one hole in Diaz’s game it is his wrestling, which is not great, although he does have very good judo-style throws from the clinch. The only things that have traditionally held Diaz back are his subpar wrestling and the fact that that he is not a physically imposing fighter and has a tendency to get outmuscled by some of his opponents.

Benson “Smooth” Henderson earned the UFC Lightweight title by defeating former champion Frankie “The Answer” Edgar twice, although the second win came in extremely controversial fashion. Henderson is a very dominant fighter with a versatile offensive skillset who can get the job done with striking, wrestling, and submissions. His striking is the weakest part of his game but it is still very effective. The biggest advantage Henderson has in this fight is his wrestling, which should enable him to neutralize Diaz’s effective striking. If Henderson can avoid being submitted from top position, he will be in a great position to hold Diaz down and grind out a decision over five rounds.

This is a very tough fight to call because both guys have so many ways they can end fights. In the end, I think this going to come down to how effectively Henderson can secure takedowns and how safely he can work from top position. Diaz is arguably the best fighter off his back in the Lightweight division, and in a boxing match I think he will consistently outland Henderson and keep him on the defensive. In the end, though, I think Diaz’s lack of wrestling and physicality will really hurt him and allow Henderson to secure takedowns and earn points. Diaz will get his shots in, but his inability to land single knockout punches will prove his undoing. I see Henderson earning a narrow decision victory on the strength of his takedowns and top control.

Below use our Odds Calculator to check your potential winnings.