MMABeting.com studied ten major UFC events (UFC 67-77) to analyze the success of Underdogs v Favourites and found that the underdogs are cashing in at a much higher rate than the odds suggest they should. After reviewing the fight odds and results from each UFC event, we have concluded that an underdog is the better wager in main event fights as well as fights in which there is a heavy favorite (-500 or more). 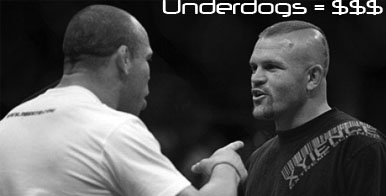 Why should you bet underdogs?