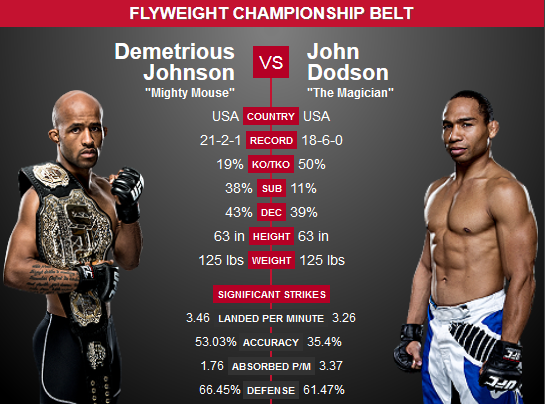 Coming to us LIVE from the famous MGM Grand Garden Arena in beautiful Las Vegas, Nevada, is UFC 191. At the top of the car din UFC 191 is the rematch of one of the greatest flyweight fights in UFC history, Demetrius Johnson vs. John Dodson. Being over twenty months removed from their first fight, we cant realistically expect the same fight out of these two, but we do except something close. Both of these fighters are looking near the top of their game and both expect to be champion leaving the octagon come Saturday night. Lets break down both of these fighters and see who’s going to come out on top.

Johnson is said by many to be one of the best fighter in the UFC. One of the most sought after aspect in the entire fighting world is the ability not to get hit. This is something that is difficult to teach, but if you have it, you have it. Demetrius is one of those lucky few that’s got it. He’s so smooth bouncing around the octagon and almost never seems like a strike ever phases him. I know that he was knocked down twice in his last bout with Dodson, but I’m not sure that’ll happen again. Also, the wrestling skills of Johnson some say are second to none. Johnson can shoot lightning fast and control not only others, but himself in important situations. Last, his hands are some of the fastest in the UFC. Not only though are they fast, they’re heavy. My advice for Johnson is just to do what you do. His body movements on his feet and the ground can lead him to where he needs to be for when he feels its necessary to stroke on his own.

Dodson was nearly forgot about about a year ago when he was struck with a serious knee injury that sidelined him for 12-monmths. Dodson came back strong though. He has won his last two fights and is looking good coming into this long-awaited rematch. When it comes to technical aspects Dodson is lacking but Johnson better has been working illustrious movements because he will not want to get in the way of a Dodson-cross. I mention earlier that Johnson had heavy hands, well Dodson is in the same league. Also, his movement in my opinion are quicker than Johnson. He might not be as smooth, but catching him will not be easy. My advice for Dodson is too pick his spots. Having only a few advantages, Dodson will want to spend most of the time on his feet. Johnson has to many skills on the mat to even give him the advantage, stay on your feet, use your athleticism and make sure you choose wisely for your attack.

Now, I don’t believe we are going to get a replay from their first bout between these two fighters but I think this fight will be good. Dodson has looked good in his last two fights notwithstanding being sidelined for twelve months but I’m not sure his quite up for the test Johnson is going to put him through. Johnson has nearly puled a “Rousey” in the Flyweight Division by almost clearing everyone out and I don’t see it stopping. The UFC waited the appropriate time to have this rematch but I just don’t think the Dodson will be able to take down the champ.