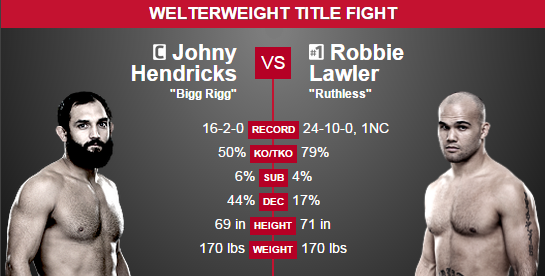 Coming to us LIVE from Las Vegas, NV the rematch many of us have been waiting for – Hendricks vs. Lawler II. This fight will be for the UFC Welterweight Championship and could possibly be the fight of the year. Many UFC diehards have been waiting for this rematch ever since UFC 171 and rightfully so. Hendricks vs. Lawler I showed the world the absolute talent each fighter had and how much they hate to lose. Nearly the entire fight was a back-and-forth slugfest of brilliant combinations landed by each fighters. Each Hendricks and Lawler arguably come into this fight in the apex of their prime and all us expect nothing less than for their refined skills to shine. Now lets break down each fighter and make a prediction…

His striking is his bread and butter which is why I feel Lawler has neglected to refine his wrestling over the years.  Lawler is going to rely on the skill that made him the fighter he is today. He will want to keep this fight standing and use his plethora of striking skills to wear down Hendricks, as he has done before. Lawyer has amazing power behind each of his punches and the rare ability of quick hands behind them. Another skill that fighters such as Lawler must contain, is takedown defense. Lawlers’ takedown defense is significant factor of the success of his career. Many fighters have the ability to knockout another with one blow, but Lawler is part of a rare bread that can keep the fight on his feet with his defensive skills and give himself numerous opportunities to pick his spots for those brutal knockout punches.

Hendricks brings many of the same skills as Lawler to the Octagon but with one slight advantage, defense. Many see Hendricks for his strong chin and quick hands, but his ability to avoid significant strikes may be the difference in this fight. If Hendricks is able to take Lawler to the ground, We might see this fight end sooner than their last bout. Hendricks wrestling skills and overall brute strength will give him the advantage to control the fight if and when it does end up on the mat. Lastly, I’d like to return to the striking ability of Hendricks. Although the power of each strike doesn’t equal to that of Lawler, Hendricks ability to place significant strikes will dominate the poor striking defense of Lawler. My advice for Hendricks would be to take this fight to the mat if needed. Hendricks can control the fight from on the ground without any worry. We haven’t seen much from Lawler throughout his career and wouldn’t expect to see much of a significant change.

I can’t imagine this fight differing much from their previous fight at UFC 171. If Hendricks sticks to the game plan he had in the last meeting, I believe the result will be the same. Lawler’s striking defense will become victim to the increased striking ability of Hendricks and round-by-round Lawler will wear down. Hendricks needs to stay on the grind though, Ruthless’s heavy hands and the ability to end a fight with his uncanny quickness is always lurking. Hendricks will land enough significant blows while using his wrestling which will open opportunities to end this fight sooner than the last.

Prediction: Hendricks by KO/TKO in the 3rd Round.