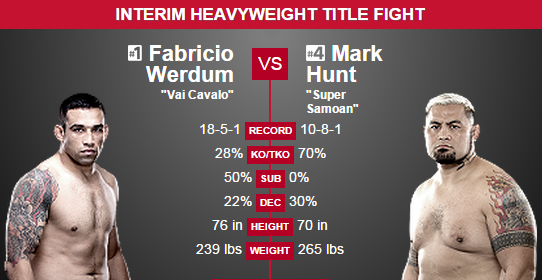 On Saturday, November 15th from Mexico City, Mexico, UFC 180 brings us Fabricio “Vai Cavalo” Werdum vs. Mark “Super Samoan” Hunt. As we all know, this was supposed to be a fight for the UFC Heavy Weight Championship belt until yet another untimely injury to Cain Velasquez. Instead, Mark Hunt will take the place of the title holder and this will be a Interim Heavyweight Title fight with the winner to fight Velasquez whenever Cain is healed up and ready to go. Besides all of that we still have a wonderful match-up in front of us. Two completely different fighting styles will make this match quite intriguing to all UFC fans watching. Now lets break it down by fighter…

Mark “Super Samoan” Hunt will give Werdum all he can handle in this interim Heavyweight Title fight. With a 10-8-1 record and not having recorded a submission victory will try and keep Werdum on his feet as long as possible. Hunt has been given praise lately by many of those in the UFC with some of them stating that he could possibly have the heaviest hands in the game. Also, not only can Hunt place one on their back with one solid blow, he can also take numerous shot to the chin without a flinch. Don’t let his size fool you either, Hunt can move around the ring with flow like rhythm and keep his opponent at a distance which make it tough for the most experienced of fighters confused. As I stated earlier, you’re not going to see Hunt take to many shots at Werdum but he will use his wrestling skills if he’s forced near the cage to make his way back out into the center. Hunt also has been known to show some decent grappling skills when needed. He can control an opponent will his brut strength and occasionally place his opponent in difficult spots to make any advances and to also maybe give Hunt a well needed rest. My advice for the “Super Samoan” is stick to what he knows best and don’t fall for the traps Werdum will set. Stay on your feet, pick your spots, overpower Werdum when near the cage, and finally land a blow that will prove that you’re meant to be there.

Werdum is the clear cut favorite in this match and its well deserved. Werdum not long ago thought he was going to be fighting for the Heavyweight Title against Cain Velasquez. Well, things have changed and here we are. If I were to presume what Werdum will be thinking once he steps into that Octagon, it’s to get Hunt on the ground as soon as possible. Werdum is known as one of the best HW grapplers in the UFC. Now I’m not implying that Werdum won’t be able to gain points while on his feet, but why would he want to keep Hunt in his wheelhouse.

When it comes down to it , you have to expect that Werdum has a game plan to keep the heavy fist of Hunt from landing a walk off KO by shooting and placing him on his back. If this fight is to go the distance, you have to expect that Werdum would have the advantage in submission possibilities and just being able to control Hunt with his world-class grappling techniques. I personally don’t think this fight will go the distance with Werdum winning by submission in the second or third round. He’s going to tire hunt by keeping him on the ground and it will inevitably lead to Hunt being in a bad spot and Werdum will strike.

Winner:  Fabricio Werdum by Submission in the 3rd Round.