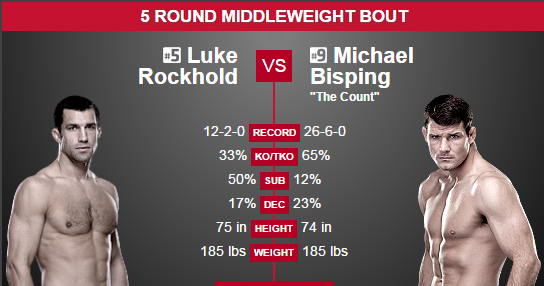 UFC Fight Night 55 will play host to a Top-Ten match-up between #5 Luke Rockhold (12-2-0) and #9 Michael “The Count” Bisping (26-6-0). We all know there is only one way in sports to be champion, and that’s beat everyone that stands in your path. Both of this fighters have much to prove before getting that elusive title shot, and it seems like there is no better time than now. With all of the offense these fighters possess, this will sure give the crowd what they came for.

If either of these guys have an edge due to momentum, its Rockhold. He’s won his two last fights and he’s looking to make a case for a chance at that Middle Weight Title. With 50% of wins coming from submission one wouldn’t think to worry about the striking power of Rockhold, I disagree. Using the eye test on the recent fights of Rockhold, I like to think he has effective power. He picks his spots and lands the punches he knows will set him up for what he wants to do next. Now, as we all know, we are not going to see Rockhold shooting too many times throughout this match but for how bad that skill might be, he defense of it is much better. Bisping typically averages about 1.5 takedowns per fight and I think here, in this fight, he’ll be lucky to land one. Now, lets say Rockhold does shoot and lands, Bisping better have been working on his submission defense. Rockhold has won by submission 6 of his 12 career wins so maybe Bisping just might want to stay off the mat whenever he can. Rockhold seems to be on the way up, but I promise you, if he at all takes Bisping for less than a threat he’ll be in for a long fight.

Bisping has a serious challenge in front of him but only a fool would completely count him out. Lets just have a look at the simple stats that indicate that in 26 career wins, he’s won by KO/TKO. If that doesn’t scare you, well then I guess you’re probably a UFC fighter. Even with all of the KO.TKO victories Bisping might have, he also takes many fights deep into the rounds. He has gone to decision numerous times and when the fight was over, it looked like he had 5 more in him. If Bisping wants to make this fight interesting all he has to do is stay in it till the end. Bisping will be able out pace Rockhold in the latter rounds and pick up the points he might have lost in the first or second. Bisping just needs to do what he does best, move, strike (often), and stay off the mat. If he can be effective in all three of those categories, this will be the fight we hope it to be.

Looking at the Vegas odds, It seems they’re pretty confident with Rockhold taking this one quite handedly. Now personally I think Rockhold will win this fight as long as he sticks to what he does best and that’s be efficient. Also, he needs to think about ending this one quicker than his norm due to the stamina that Bisping. Rockhold needs to put Bisping on his back and take care of business from there.