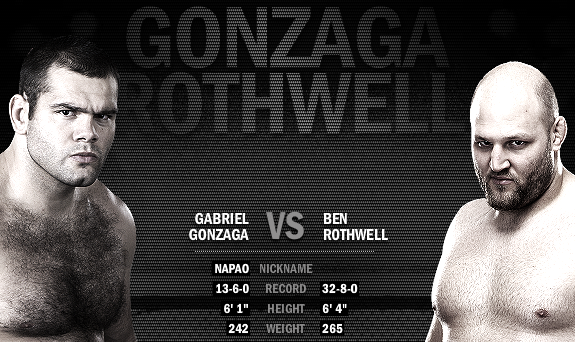 In a featured Heavyweight matchup, Gabriel “Napao” Gonzaga will square off against former IFL Champion “Big” Ben Rothwell. These are two large, physical Heavyweights with versatile skill sets, so this should be an exciting and competitive fight. Both guys have had mixed success in their UFC careers, but are capable of big time offense and match up well against each other.

Gabriel “Napao” Gonzaga is a very large and dangerous Heavyweight. A long-time UFC veteran, Gonzaga is a somewhat inconsistent performer. Nevertheless, he has a lot of offensive tools in his arsenal and can finish fights standing and on the ground. He is one of the best submissions grapplers in the Heavyweight division, and while his striking is not technically superb, he has very heavy hands and hard kicks. If this is a standup fight, it is going to come down to who lands a big shot first. What Gonzaga has to do is prevent Rothwell from securing takedowns. He has great jiu-jitsu, but he is going to get mauled if he has to work off his back. He needs to try to keep this fight at a distance and use his long arms to set up big punches, or try to sneak in takedowns of his own.

“Big” Ben Rothwell, the former IFL Heavyweight champion, has been somewhat disappointing since arriving in the UFC. In his last fight, though, he made a statement when he destroyed Brendan Schaub with strikes in just over one minute. Rothwell is a tough, versatile Heavyweight with good striking, a solid chin, decent wrestling, and a dangerous top game. On the feet, he is going to need to watch out for Gonzaga’s leg kicks and big haymaker punches, but most importantly he is going to have to keep himself from getting taken down at all costs. If Gonzaga gets top position, it is highly likely that Rothwell will be forced to submit. Dictating position has to be Rothwell’s number one priority.

This has all the makings of a bruising, physical clash. Both of these guys are big, strong, and durable. Either one of them could land a knockout punch or kick at almost any point of the fight, which only adds to the intrigue. I see this one going the distance, though, with both guys dishing out punishment. Ultimately, I think the edge goes to Rothwell, who should be able to control the position and use the clinch to grind out a decision victory.

Add a little more excitement on fight night, you can bet on this fight at Bovada.Iv Odds. Check out my review of Bovada here…