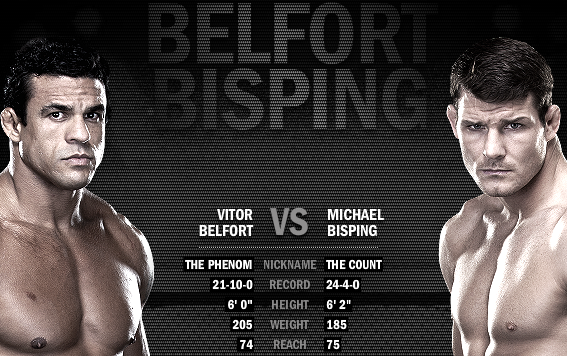 In the main event of the evening, UFC legend Vitor Belfort will square off against Michael “The Count” Bisping in a featured Middleweight matchup. Belfort, once on of the UFC’s top fighters, has re-established himself as a force in the Middleweight division with his powerful striking. Bisping, though, is a tenacious competitor who has continually defied expectations and remained a top figure in two weight classes. It is entirely possible that a win here means a title shot for Bisping, so there is a lot on the line in this fight.

Vitor Belfort is, without a doubt, one of the scariest strikers in the UFC. Although he has recently suffered two decisive losses against Middleweight champion Anderson Silva and Light Heavyweight champion Jon Jones, Belfort has left no doubt that he is a formidable opponent with destructions of Rich Franklin, Anthony “Rumble” Johnson, and Yoshihiro Akiyama. Belfort has devastating punching power and a very underrated ground game to go with it. There is little question that, against Bisping, he will enjoy a sizable advantage in knockout power. If he can prevent Bisping from frustrating him with volume punching, he will be in a great position to earn a knockout victory.

Michael “The Count” Bisping, despite not being a world-class threat in any one area, has cemented himself as a top player in the Middleweight division. While he isn’t the most powerful striker in the UFC, he is a very technical striker who confounds his opponents with accurate punching, good hand speed, and ever-improving wrestling. Against Belfort, he would be wise to try and mix takedowns into his striking to keep Belfort from getting too comfortable. If he spends the entire fight standing in front of Belfort, he is playing with fire.

This is an interesting stylistic matchup. Both guys are likely going to be content to stand and box each other. Bisping has the more technical striking of the two, but Belfort has an immense edge in punching power. If Bisping can mix in some takedowns and try to keep Belfort on the defensive with quick, high-volume strikes, he might be able to earn a decision win. I think he is going to have trouble dealing with Belfort’s explosive knockout power, though. I think Bisping might enjoy an edge for a while, but eventually he is going to overextend himself and get caught with a big haymaker. Belfort by T/KO.